I have been bugging DH for a kitty for months. I never thought I’d like cats until my ex-roomie had one that was so cute it hurt. Our last place didn’t allow pets and now that we own our place, it was time to look for one! My friends as a joke gave me a bag of stuff for my bday for a kitten and even printed up the online info from one. After about 5 minutes of figuring out if it was true, they told us it was a joke.

So, DH and I have gone back and forth over getting a kitty. He said no, I said yes. Finally, last Wednesday, he told me that he had contacted a few rescue places and told me that I could get one. YAY! I was so excited!!!

Then mad cuz the person I contacted drilled me with questions, and then never followed up with the info on email. I was bummed. Then I remembered our local shelter and took my mom with me. We found this lil guy and by time DH said it was cool (and after sending him a few pics on the iPhone) the front computer was closed down. So my mom and I went and got the supplies for him at Walmart and then headed back in the morning.

We were the first one there and so we took him home. She baby sat him while I worked and I booked out early to pick him up (luckily it was a slow day at the office). It took DH and I 2 days to come up with a name. But we have it – Butters!! And when he goes all crazy, he’ll be Professor Chaos. He’s been really awesome and not getting into too much trouble. He sleeps with us and even has his own blankie! My mom made it for him. 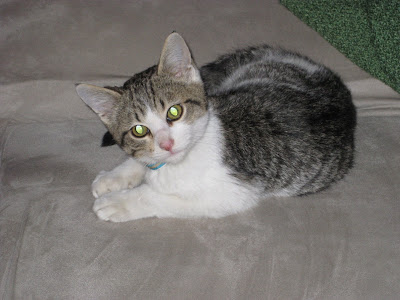 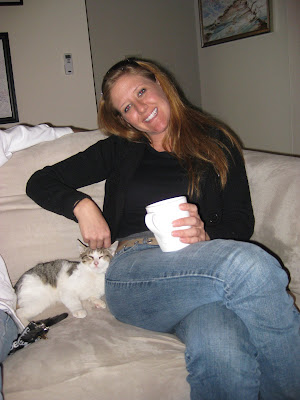 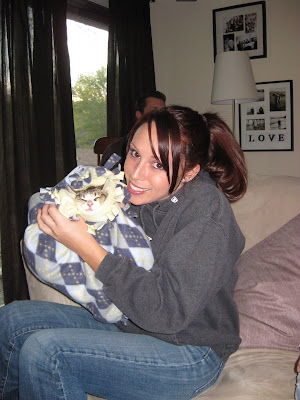 Auntie Jen, with the kitty burrito 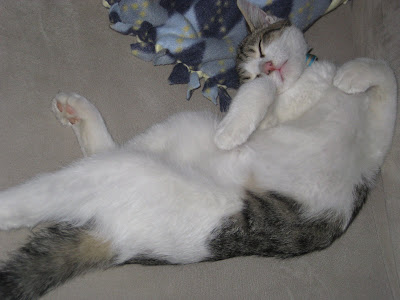 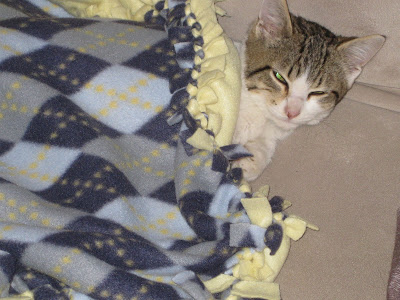