You are here: Home / - / Canop-wheeeeeee Tour

Ok so as a reward to myself for clearing off enough space to actually see the blue desktop of my very own desk (yay for no more coffee table/lap desk!) I have our pics from our excursion in Jamaica.

It was about an hour drive to get to the area. The tour was on the property previously burned back during hte time of slavery with a rebellion lead by Sam Sharpe. The main home of the plantation owners is hidden amongst trees that grow both in and out of the structure. The area now has 4 different types of orange trees that include the Valencia orange. Our bus driver told us that one of hte types are kept on the island and not exported. Although we don’t know if we ever had some (there was one garnish with our breakfast that looked like a lemon-lime, but tasted like an orange. Perhaps it was this???)

Anyways, the tour was amazing! One of the runs was over 1000 feet! Everything was approximately 150 feet in the air, and we zig-zagged over a river that separated two parrishes. I wish I would have kept notes to tell you which ones! I think one was St. James. The canopy tour was hosted by Chukka tours, and was the same one as seen on The Girls Next Door. Actually one of our guides was their guide! What’s good for them is good for us! 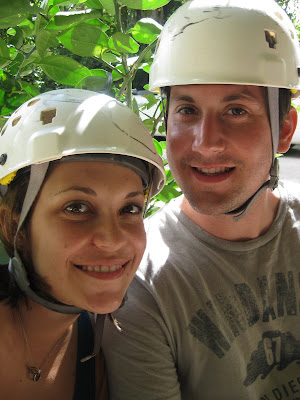 (us, in the jungle. God we look tired) 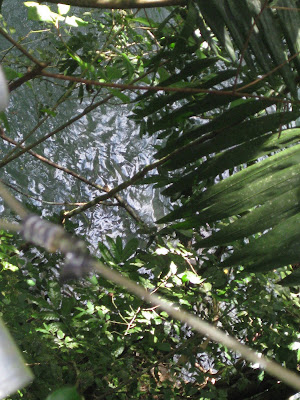 It was SO GREEN there. And now, for some videos! This first one might cause some motion sickness in the beginning. But it gets better I swear!

I had more videos to share, but it’s been taking me 3 different nights to wait for this one to upload. I guess it’s too big a file. But we had a fantastic time on the zip line! 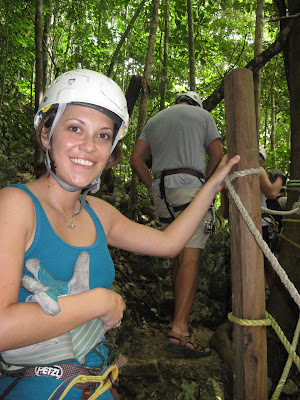